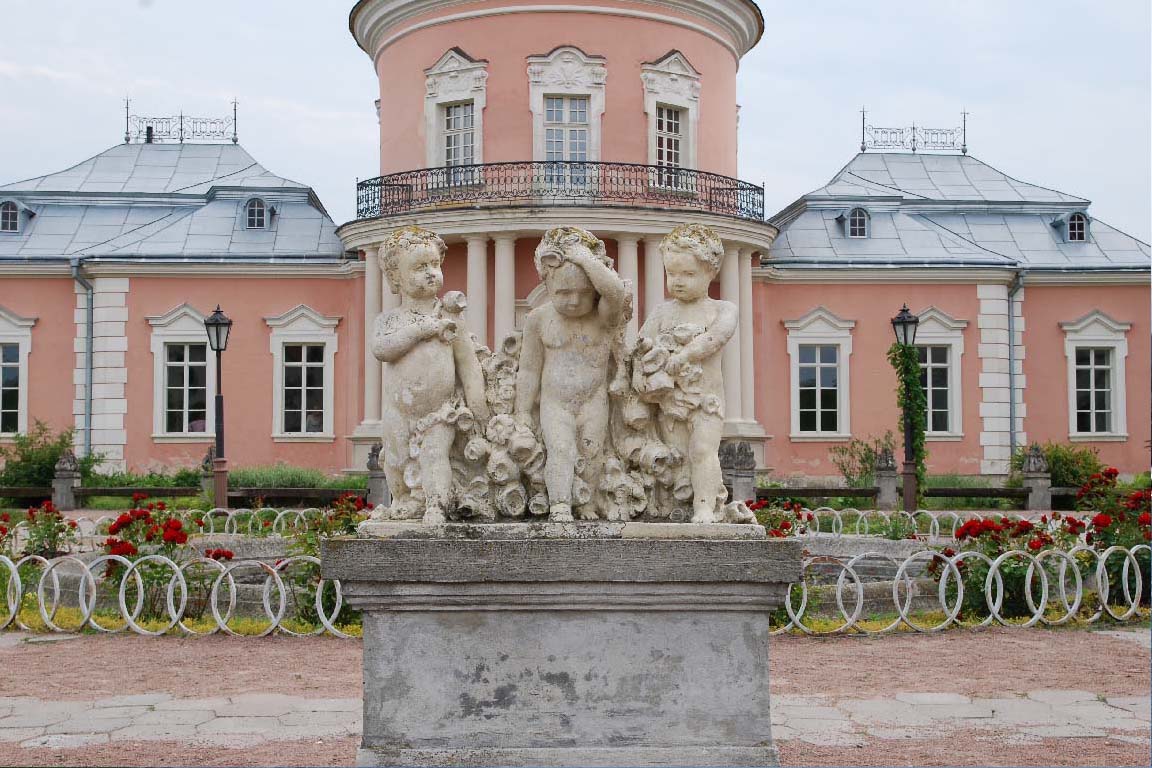 Poland covers an area of 312.000 km2, and three centuries ago it occupied almost three times bigger territory. At that time it reached almost one million km2. Few today’s Poles are aware that 3/4 of the territories belonging to the First Polish Republic at that time were located east of today’s Polish border. It was there that the events important for the fate of the country took place, where the great magnates of Poland were established and, as a consequence, their impressive residences – castles and palaces, most often built in the style of palazzo in fortezza, combining defensive and representative functions – were established.

A palace full of treasures

When Stanisław Koniecpolski, the great crown hetman decided to build his castle and palace complex in Pidhirtsi, for its place he chose one of the hills of the Woroniaków plateau, surrounded by vineyards famous at that time. The castle was built in the years 1634-1640 for fun and rest after military difficulties and the Polish Republic adventures, as Stanisław Koniecpolski informed in memorials. It is believed that the author of the design was Andrzej del Aqua, whose work was the fortress in Brody or Constantino Tencalla, the royal architect.

From the windows of chambers, apses and bowers, there was a beautiful view of the Styr valley, and those who were visiting the Koniecpolski family had to admire from a distance the vastness of the building raising above the surrounding area. They were delighted when they reached this place.

The Knights’ Rooms was full of weapons and hussar equipment, right behind it the Karmazynowa Room, then the Chinese Room, the Gold and Mirror Room, then the Mosaic Room and the Yellow Room, next to the Green Room where 106 paintings by Szymon Czechwicz hung and just behind the Green Room there was the chapel. If somebody says that the interiors of all the rooms were unique, is to little. Their walls were covered with sophisticated, artistic panelling, stuccos by Giovanni Battista Falconi, paintings, other stuccos, damask, Venetian mirrors, paintings framed in richly carved frames, the ceilings were decorated with plafonds celebrating the castle owner, marble floors, marble fireplaces, stoves made of Gdansk tiles, and splendour complemented the stylish furniture, collections of works of art and family keepsakes. It is no wonder that everyone who saw it for the first time was awestruck. 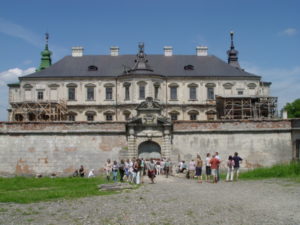 After the outbreak of World War II, Prince Roman Władysław Sanguszko saved part of the collections from the castles in Pidhirtsi and Gumnisk. The convoy managed to get to Romania, and the collections reached as far as São Paulo, Brazil. The cultural foundation Sociedade Sanguszko de Beneficência was established from part of the sub-horizontal collections and it functions nowadays. After the occupation of the former Tarnopol voivodeship by the USSR, a tuberculosis hospital was established in the castle. A fire in 1956 also threatened the castle structure. In 1973-1974, scenes for the film “The Deluge” by director Jerzy Hoffman were shot in the rooms of the residence. Pidhirtsi illustrated then the Radziwiłł castle in Lithuanian Kėdainiai. It seemed that the takeover of the castle complex in 1997 by the Lviv National Gallery would have stopped the destruction process. Unfortunately, in 2008 the palace was on the New York World Monuments Watch list as one of the hundred valuable monuments in the world threatened by destruction.

Just about 15 kilometres west of the awesome seat of the Koniecpolski family, the castle in Olesko rises, whose special place in the history of Poland is marked by the birth of two Polish kings in its chambers. The first, then crowned  by the God’s grace who saw the daylight of this world in the Olesno castle was also the Grand Duke of Lithuania, Russia, Prussia, Mazovia, Samogitia, Livonia, Smolensk, Siewierz, Chernigov, John III Sobieski. The second was born 11 years after him and his name was Michał Korybut Wiśniowiecki. The first one has made its mark in the history of Poland and Europe by stopping the Turks’ invasion of Christian Europe near Vienna. The second, that is Michał Korybut, entered our history as probably the most clumsy ruler of the First Polish Republic. 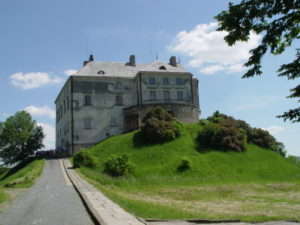 The storage facilities of the Lviv National Gallery were created in the interiors of the Olesko castle that was deteriorating after the Second World War. It was thanks to the efforts of its then director, Borys Woźnicki, that priceless historical treasures were brought there from churches and Orthodox churches in ruins. The result is that the castle in Olesko is now one of the largest sculpture storage facility in Europe and, what we Poles are most interested in, the seat of the best Polish art collections outside our country. There are about 1000 portraits of Polish nobility and magnates among them, notably two legendary paintings from the late seventeenth century by Martino Altomonte. One could say that they are painting documents illustrating the victories of John III Sobieski, i.e. “The Battle of Párkány” and “The Battle of Vienna”. They are monumental paintings due to their dimensions 8.5 m x 7.5 m.

For nearly three centuries, these paintings have been hanging in the collegiate church of St. Wawrzyniec in Zhovkva. However, after the end of World War II and the incorporation of these territories to the USSR, the Soviet authorities made a storage facility in the collegiate. In the 1970s, the paintings were rolled up and stored in storage facilities, which did not stop the destruction process. Only in 2007, as a result of the agreement between the Royal Castles in Warsaw and Wawel, Warsaw and Jan Matejko Academy of Fine Arts in Krakow and Lviv National Gallery, the paintings were transported to Warsaw. It was here that the conservation works have begun, largely funded by the Ministry of Culture and National Heritage. It was led by a team of Polish and Ukrainian specialists under the direction of the conservator Paweł Sadlej. The works have been lasting for two and a half years and they costed over PLN 4 million. This is the most expensive conservation of our cultural monument located outside of Poland. In the spring of 2012, the paintings came back to Ukraine and were hung in the castle in Olesko and in the castle in Zolochiv.

For the ideologues of communism, which for less than half a century ruled the historical eastern lands of the former Polish Republic, castles, palaces, manors and related monuments of works of art and culture were synonymous with the exploitation of the natives by “Polish lords”. “Mass products” storage facilities were made in the deprived of goods, some time wonderful structures, no one cared about their technical condition, and naturally, they fell into ruin.

Author of the text: Jacek Stachiewicz
Photos made by: Krzysztof Staszewski, Krzysztof Zieliński

Next Story:
Sights in the East