Sights in the East

Throughout the centuries, famous for the acts of the Polish military and for the history that takes place within their walls, and of which they unintentionally became heroes. Fortresses in borderlands, once guarding the Republic of Poland against Tatar and Turkish invasions, still arouse emotions among more and more tourists visiting them. They are a material evidence connecting these areas with the Republic of Poland, they were the most important part of its historical landscape. They were a bridge between the tradition of specific families, lands and regions, and literature and art.

Some of them are carefully restored, but there are also those whose fate seems to be confirmed, and the poor state of preservation caused by decades of neglect will not allow them to be rebuilt. Here is a presentation of subsequent monuments so strongly related to the Ukrainian-Polish border.

A favourite of Maria and Jan 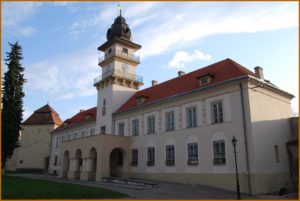 The distance to Zhovkva from the Medyka border crossing is 107 km, from Krakowiec it is much closer, 78 km. He owes his existence and legend to two families. First of all,  to Żółkiewski family, specifically the field hetman of the crown Stanislaw Lubicz coat of arms, who founded them in 1597. He left the decision on what the whole complex of buildings, i.e. the city and the castle, should look like in the hands of the followers of the Italian Renaissance in the Polish architecture of Paweł Szczęśliwy. But with the order not to deviate too much from Zamość. Żółkiewski supervised the construction of the town and the castle on a daily basis, and when he had to deal with affairs of the Republic of Poland, leaving the affairs of Zhovkva, his wife Regina Żółkiewski (née Herburt) took care of the architect’s ideas and their implementation. The palazzo in fortress style castle was built on a square plan with a side of 100 metres, with four quadrilateral towers at the corners (there are three left). A four-storey tower with a gate decorated with Lubicz coat of arms and a foundation board on the courtyard side led from the town to the castle. Inside the walls were four two-bay buildings connected by hoardings with towers. The main palace was a building located opposite the gate. Doors and windows had profiled stone framing, and above them, there were Latin sentences. Under the wings of the castle there were two-storey vaulted cellars. Seven years after the start of the construction of the town and the castle, Sigismund III Vasa granted it town rights, but 17 years later the hetman suffered a tragic death at the Battle of Cecora. His wife Regina and son Jan came into possession of the property. Afterwards, the city was taken over by Zofia, née Daniłowicz, and then, her daughter Zofia Teofila, who married Jakub Sobieski, which resulted in the birth of the future king Jan.

Zhovkva has always been the favorite seat of Jan Sobieski. When he became its owner, he extended the defensive walls and decorated the city in the Baroque style. He rebuilt the interior of the castle, together with his wife Marysieńka, giving it a look of truly royal residence, elegant and exquisite at the same time, in which numerous war trophies of the hetman and later King Jan took prominent places. It was during his time that a school of icon writing was established in Zhovkva, as well as a Hebrew printing house and a faience factory.

After the death of the Sobieski family, Michał Kazimierz Radziwiłł “Rybeńka” became the owner of Zhovkva and was the last to take care of the city and the castle. The next owners did not feel obliged to cultivate the Polish historical tradition connected with this place, they had other interests, so the city collapsed, and the castle property was auctioned and sold out.

After the first partition of the Republic of Poland the castle was taken over by the Austrians, during the First World War the castle was burnt down by the Russians, in the period of the Second Republic there were military barracks and then, a school. Day by day, the city and the castle lost their importance, and the complete lack of interest in his past occurred when Zhovkva was within the borders of the Soviet Union. In 1939, the monument to King Jan Sobieski, standing in front of the town hall, was destroyed, and the monument to the founder of the town, Hetman Stanisław Żółkiewski, standing in the park, met the same fate. Nowadays, there is a museum in part of the castle rooms.

Since a large part of the castle has survived to this day, it is worth visiting Zhovkva, especially as it is on the car route from Lublin through Hrebenne to Lviv.

From the royal residence to the gloomy prison

There is a castle  within the borders of the town of Zolochiv, located on the Złoczówka river, which is a tributary of the Bug. Its most wonderful times are inextricably linked with the history of the Republic of Poland, which ruled this area for centuries. And what is obvious, it is also connected with the figure of King Jan III Sobieski, for whom (and his Marysieńka) the Zolochiv castle was one of the favourite places. 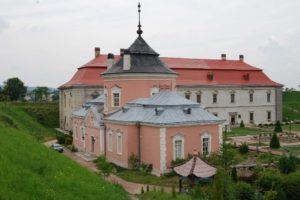 View of the castle in Zolochiv. Photo taken from one of the preserved bastions – a revel.

In 1552, the city was under the control of Marek Sobieski, grandfather of the later king Jan. However, Marek still lived in a wood fortalice. Only his son Jakub built a brick castle in 1634-1636, surrounded by fortifications in a bastion system according to the New Holland style. He did not enjoy it for long, because he died 10 years later, at the age of 55. His wife Teofila Zofia Sobieska, née Daniłowicz, mother of Jan, lived a year shorter than him. Because she was 16 years younger than her husband, she lived till 1661, but she also did not see the coronation of her son, who had inherited the Zolochiv castle.

Before John Sobieski, by God’s grace, became the king of Poland, the Grand Duke of Lithuania, Ruthenia, Prussia, Mazovia, Samogitia, Livonia, Smolensk, Siewierz and Chernigov, he energetically took care of the Zolochiv castle, which was repeatedly destroyed during the Cossack wars. According to the sources, it was this castle where he started his military expeditions, followed the enemy’s movements and set up military camps at its feet. Both Turks and Tatars besieged the castle several times.

Although the castle in Zolochiv was not the main residence of King Jan, the ruler took care of it. It was well maintained and had expensive equipment, as befits one of the royal residences. Because of its location, it played a significant role during the military actions of the king. As a result, it had a strong, experienced garrison and a well-equipped arsenal.

After the death of the king Jan, the castle in Zolochiv was inherited by his sons, first Konstanty, then Jakub. In 1740 it became the property of the Radziwiłl family, who did not care so much concern for its condition. As was stated in the inventory of the castle drawn up in 1768, it had been preserved as a whole, but that it required a “significant renewal”. According to the inventory, the bottom of the palace contained: two hallways, six rooms, two chambers, two larders, a chapel, sacristy and treasury. On the first floor there was a large hallway, ten rooms, a hall and a small hallway. The windows were either tiled or leaded. All stoves were tiled, green at the bottom, and white at the top. The inventory explained the original purpose of the rotunda pavilion, which he called the “Chinese palace”. However, the condition of this pavilion, whose round room was covered by a dome with a gallery, was miserable. The outhouse with kitchen and bakery for the stuff was opposite the main palace. In the corner there was a wooden stable and the timbered well nearby. A powder magazine was located at the gate. There were 21 cannons and 2 mine thrower at the gate and on the shafts. The arsenal included 82 pieces of harquebus and 85 rifles.

The count Łukasz Komarnicki purchased the castle at auction in 1801, he renovated the building, but 33 years later, his son leased it to the Austrian army for three companies of 15 regiments. In 1872, the building was bought by the Austrian government and, as with many other castle and palace buildings in the eastern borderlands, it was used for court and prison purposes. In the years 1939-1944 he was an executioner of the NKVD, and then the Gestapo.

Currently, the thoroughly restored castle has museum functions as a branch of the Lviv Art Gallery. In addition to the historical exhibition, several rooms on the ground floor were dedicated to the history of the castle as a prison and place of Stalinist and Nazi execution. In the summer, the museum is open from Wednesday to Sunday from 10.00 a.m. – 06.00 p.m. A small Museum of Eastern Cultures was opened in the Chinese Pavilion in 2004.

Author of the text: Jacek Stachiewicz
Photos made by: Krzysztof Staszewski 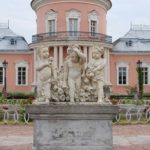 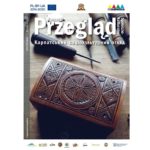