An old wooden cottage in Olchowiec

The Carpathian Museum of Folk Culture was guided with passion by the son of the owner and originator – Tadeusz Kiełbasiński – who came here for the first time in the 1950s as part of his mountain hikes in the Low Beskid Mountains run by the Carpathian Association of the Branch in Łódź. In the 70s he settled here for the love of Lemko region and his future wife. Since then, the next generations care for local tradition.

Olchowiec is a 500-year-old village in the heart of the Low Beskid. One of the few Beskid Lemko villages in which people of Lemko origin live continuously. Thanks to fake documents, they managed to avoid the export of the “Vistula” action. Now, there are 16 farms out of 96 from before World War II.
The village of Olchowiec was founded in the first half of the 16th century under Vlach law, at the intersection of the Wilsznia and Olchowczyk streams. Horb Mountain rises in its centre.
The name derives from alder, the tree which in Ukrainian is called wilcha. Before World War II, the village had nearly 90 farms and about 500 inhabitants.
As a result of fights for the Dukla Pass and deportations to Ukraine and the tragedy of “Vistula Action” Olchowiec decreased to 12 farms, losing almost 90% of pre-war buildings. The preserved cottages and farm buildings required renovation, as a result of which (e.g. replacement of the roof covering) they lost their original character. However, one of the last Lemko cottages preserved in an unchanged form was saved almost at the last minute. Mr Tadeusz Kiełbasiński bought his cottage in 1981 and transformed it into an open-air museum. 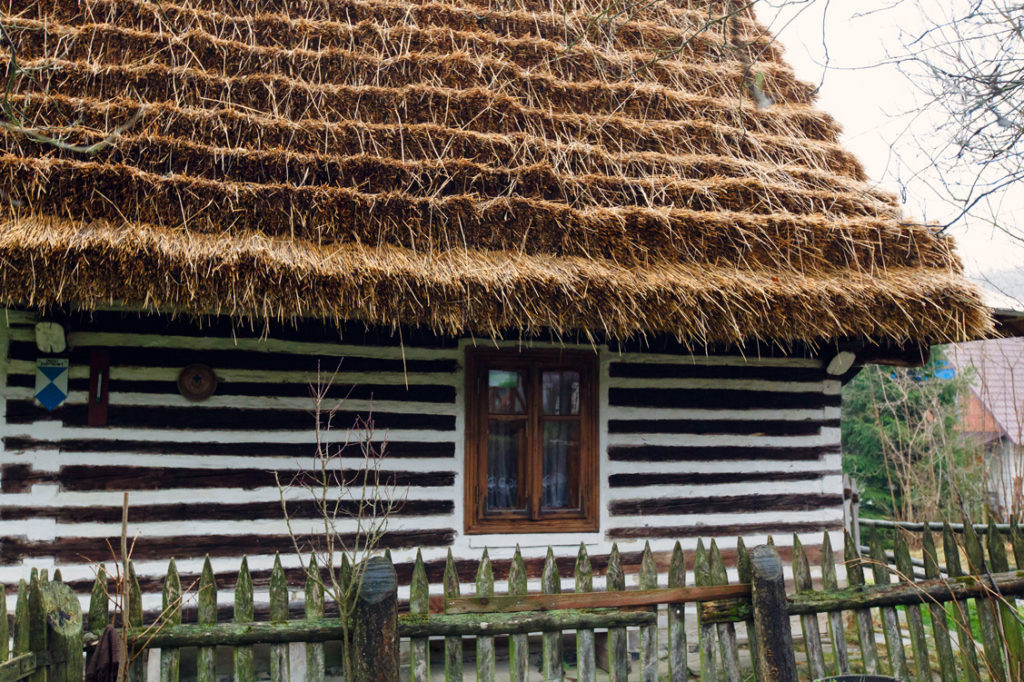 As in the past, the roof of the Lemko cottage is covered with expertly arranged sheafs.

The wooden “Zabytkowa chyża (Historic cottage)” was built in 1910. Mr Tadeusz kept the cottage unchanged. It was entered in the register of monuments in 1986. Traditional wooden construction. Buildings under one gable roof, covered with straw thatched roof: alcove, hallway, barn, chamber, cowshed. The rooms here are low, small windows, short bed, table, wings and benches to rest and sleep, clothing boxes, icons on the walls, pictures of saints. An important place is a large kitchen stove and bread oven with an added chimney – until  50s “kurna chata” (chimneyless hut with holes in the roof for the smoke) which until the 1950s.
The exhibits from the surrounding villages are collected in all the rooms.
Mr Tadeusz also brought them from the Beskid Sądecki, Low Beskid, Bieszczady Mountains, as well as from the Boyko region and Hutsul region. The neighbours still bring something new. In the past, it was enough to enter the forest, bend over by the road and pull out an object from the grass. There are a lot of interesting things done in the home workshop: a field cradle, a curler, a scythe for the left-handed, an original nutcracker. The fronts of the First and Second World Wars fighting for the Dukla Pass left many artifacts: helmets, crosses, scales, magazines, mortars, mines, anti-aircraft barrels, cannons, map holders, water bottle and even bizarre ornamental tank shell vases.
The exhibits travel by presenting themselves in other branches of the Carpathian Society, which confirms Mr Tadeusz’s passion not only for preserving these objects but also for sharing them. In packages well packed and prepared for the journey or just returning from it: embroidered napkins, colourful costumes, charts with photos of miniature Carpathian Orthodox churches. These meetings are famous for their colourful stories. And a visit to the Historical Habitat leaves a memory of the host’s extraordinary hospitality.
Historic cottage is an extremely colourful and vigorous place. The cultural and natural path opened in the area around last year facilitates the tourist traffic. School trips come here from spring to autumn. Experienced tourists – all year round. 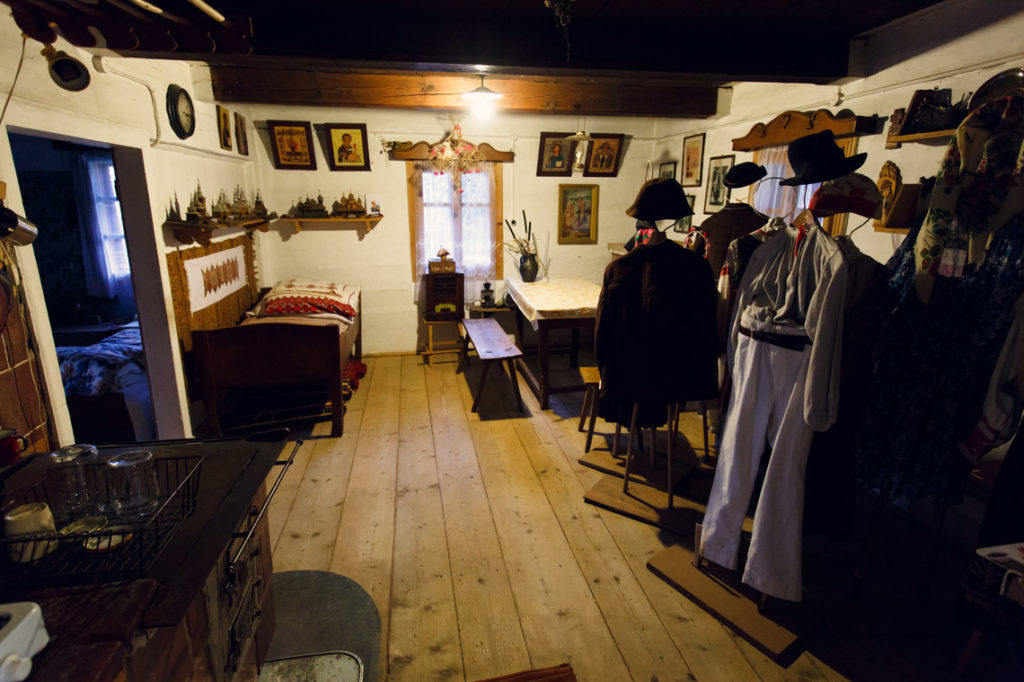 The interior of the wooden cottage is filled with carefully renovated exhibits.

Mr Grzegorz Kiełbasiński is the son of the owner and originator – Tadeusz Kiełbasiński – who came here for the first time in the 1950s as a part of mountain hiking in the Low Beskid, supervised by the Carpathian Association of the Branch in Łódź. In the 70s he settled here for the love of Lemko region and his future wife. Since then, the next generations care for local tradition. Mr Grzegorz talks eagerly about it and he is extremely hospitable. However, from time to time, he adds that his father would have just told us about it in detail… Looking at the map with the huts and the names of their owners, he emphasises the enormity of documentary work that his father has done here for years.He draws our attention to thatched roofs. Replacement of the roof had been lasting for 6 years: the host near from Tyczyn had been binding 4,000 of sheaves. A dying tradition. It is expensive, but it follows the craftsmanship. It looks wonderful! It is enough for 50 years, although in the past the straw was thinner – there were about 1000 pieces in one sheaf, at present, there are probably 500 pieces. We will also remember that the roof on the north side will stay longer – due to smaller temperature differences compared to the sun from the south. 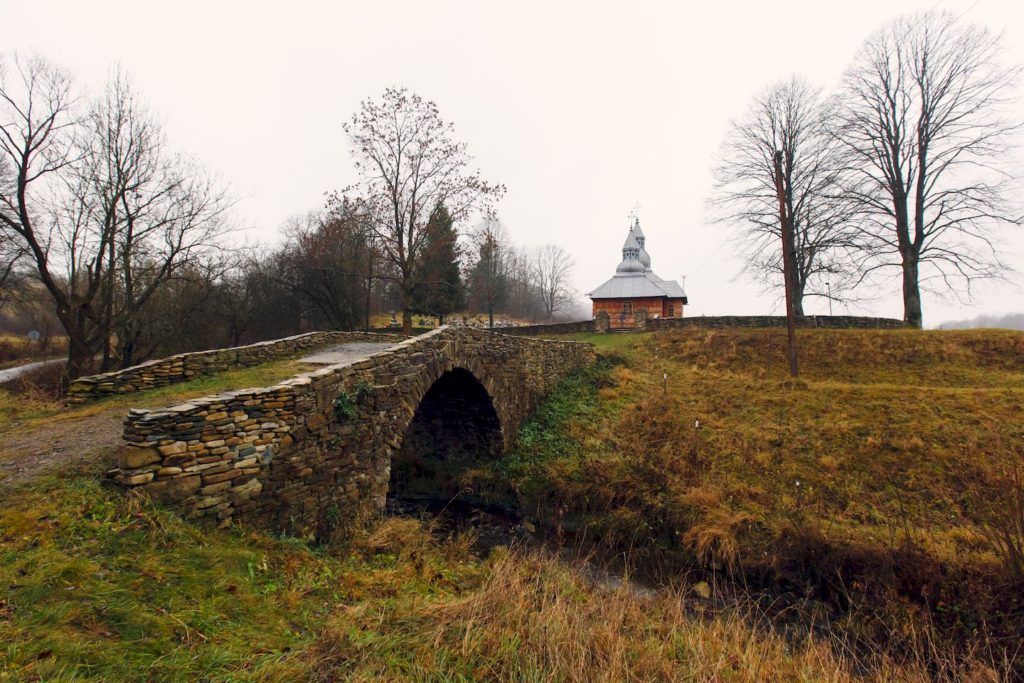 Close to the wooden cottage there is an Orthodox church of the Relic of St. Nicholas from Myr Licejskie to Bari with a stone bridge.

Author of the text: Justyna Warecka
Photos made by: Dariusz Dąbrowski 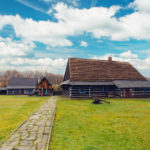 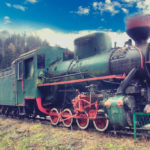