In the world of Roman Kumłyk 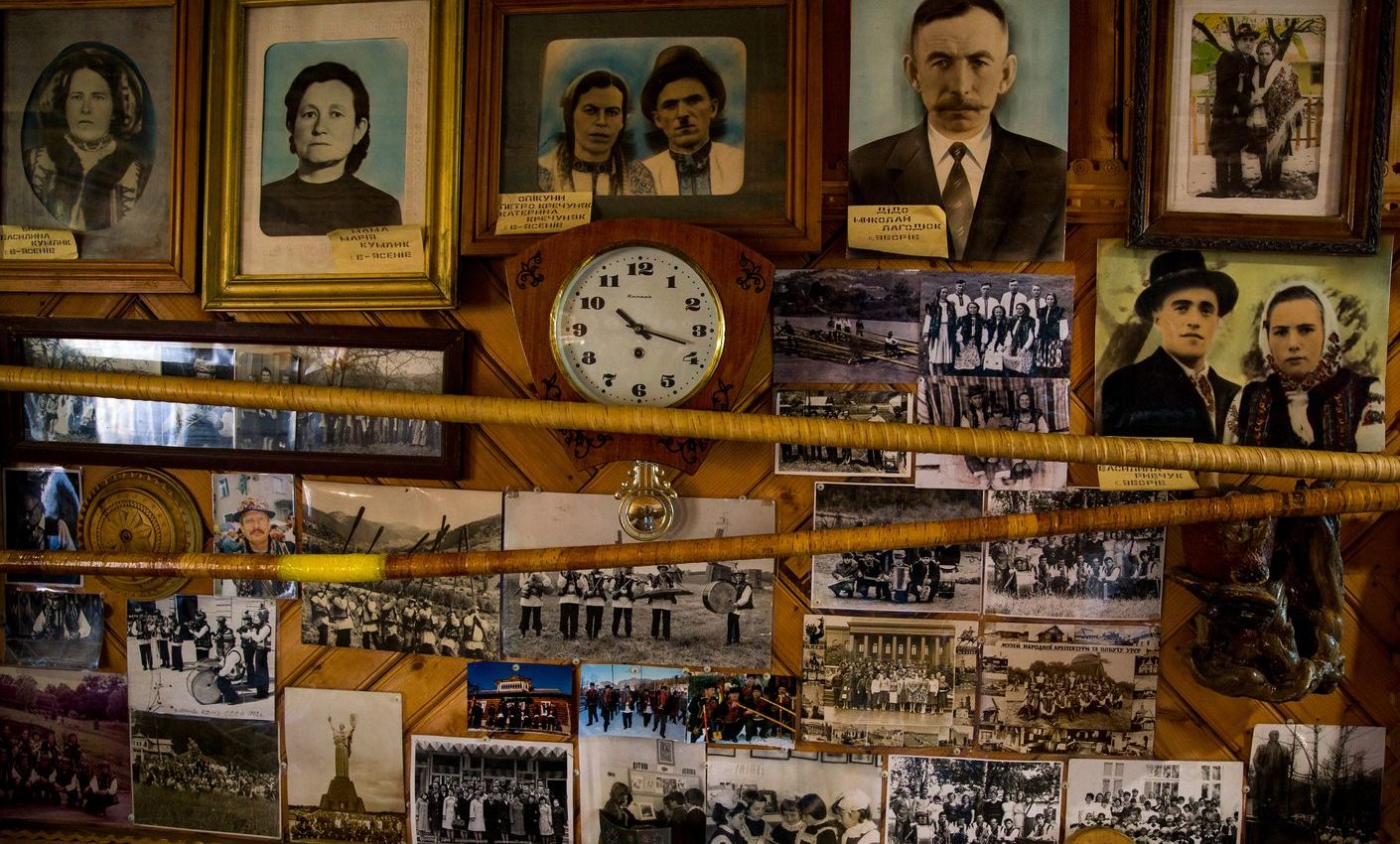 A small, modest hut on the top of a hill in today’s Verkhovyna, the former Żabie is filled with a unique atmosphere. This is the world of Roman Kumłyk and at the same time the world of the unique musical tradition that is already disappearing in today’s reality. A small room upstairs is filled with the treasures of the past. These are instruments of the Hutsul region, gathered and saved from being lost in oblivion. 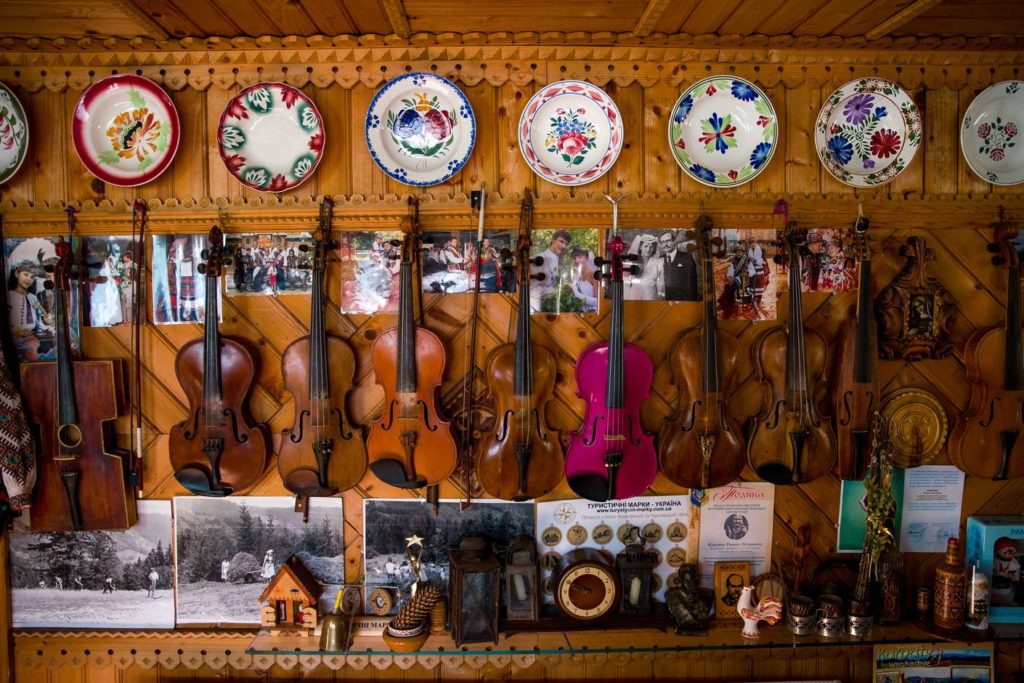 Roman Kumłyk, who died in 2014, went down in history as the greatest musician of the modern Hutsul region. He was a virtuoso in his profession, a multiinstrumentalist who brought back the musical tradition in Hutsul region and helped to promote it in a modern form. Concerts by Roman Kumłyk and his band “Czeremosz” have become popular all over the world, including in Poland, which he often visited since the 90s of the last century. He has collaborated with the Lublin Philharmonic and Warsaw Philharmonic, the Gardzienice Centre for Theatre Practices. He vefriended with the Santa Claus Orchestra in Lublin and he often attended the Folk St. Nicholas Day Festival called Mikołajki Folkowe.

And he said: I have been collecting the exhibits for 25 years. They include costumes, embroidery, various crafts, devices, documents, publications on Hutsul region — Włodzimierz Szuchiewicz, Oskar Kolberg, Stanisław Mierczyński, Stanisław Vincenz. Finally, folk instruments, from the trembita to the Jew’s harp. Among them are bagpipes, flutes, 8 different decorated cimbaloms — the oldest ones are 150 years old, the youngest are 50 years old, there are 24 violin and drums.” 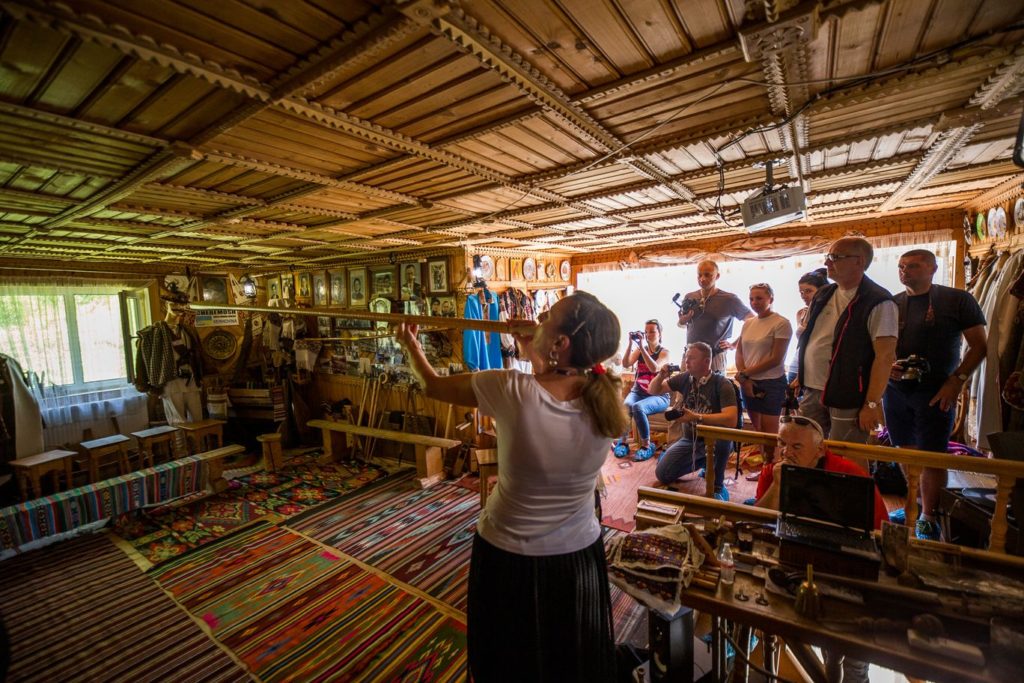 The daughter of Roman Kumłyk, Natalia, presents the game on the Hutsul trembita

The artist devoted his life not only to collecting the material heritage of the musical culture of Hutsul region, but also to documentation of a more fleeting and elusive tradition — the music itself. Over the years, he wrote down melodies, learned to play them on instruments he collected and performed by himself. He was self-taught, but undoubtedly a master of his trade, who saved the intangible heritage of his small homeland from oblivion and gave it a new life – in the form of numerous concert performances, new arrangements, music records.

Currently, the legacy of Roman Kumłyk was taken over by his daughter, although during his lifetime he did not suspect that one of two well promising medical students would take responsibility for the further fate of the Hutsul musical tradition. Natalia Kumłyk inherited talent from her father. She mastered her instrument flawlessly, and like her father, she learned everything herself. In a small museum located in Verkhovyna, she currently organises music workshops presenting the technique of the play, telling about the traditions accompanying the music. Because music was an integral part of the Hutsuls’ life. 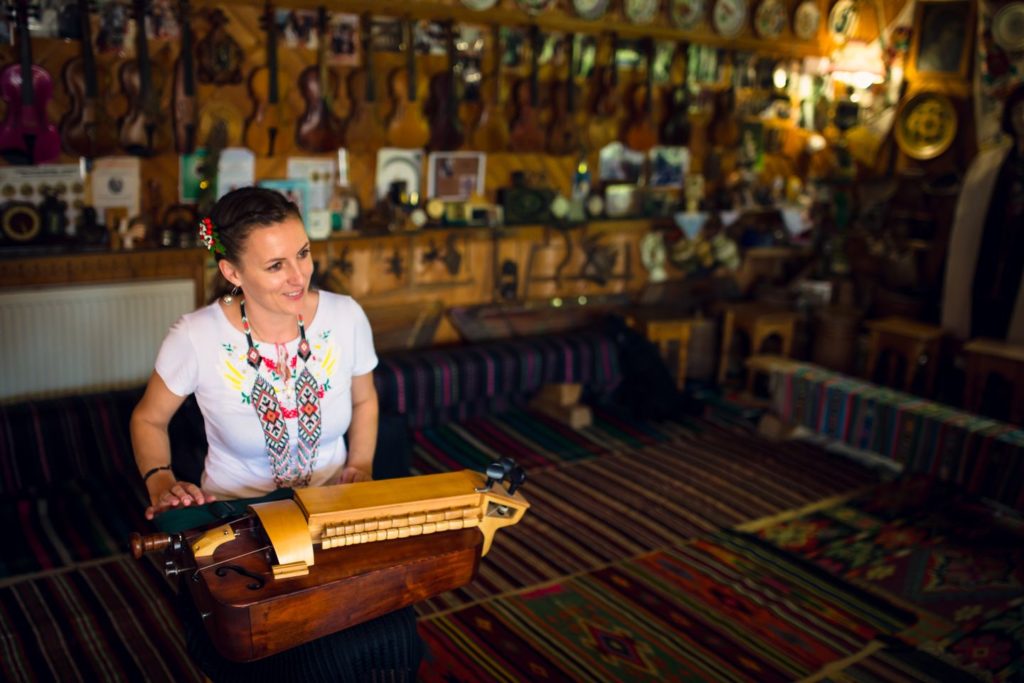 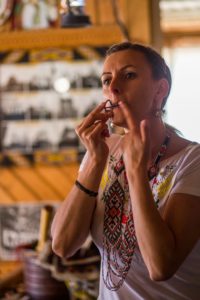 The first important context in which it is recalled are wedding ceremonies. Roman Kumłyk – who in addition to playing in “Czeremosz” also played in a wedding band – he said: wedding musicians must be familiar with the melodies of every village, especially in the ceremonial repertoire. Once upon a time, the violinist who was a replacement for me did not know the Carpathian Ruthenia festive songs – it was a problem. In Verkhovna, singing is accompanied by a shepherd’s pipe (sopilka), a bayan (button accordion) and a violin, and in Carpathian Ruthenia the whole band must play. We play, and there is nobody to sing. I even know what songs the wedding guests in Carpathian Ruthenia like to sing, and which ones they do not like. Weddings are hard work. For the wedding, the band appears on Saturday about eleven in the morning. Musicians start to play when decorating “sosnoweńki dereweczek” — a wedding rod, at the same time, some of us install a sound system. Then, the whole band accompanies the wedding couple on their way to the registry office. After their return, the party starts, and the guests come even until ten p.m. The party sometimes lasts until the morning. After a few hours of rest, the band takes part in the wedding procession to the church and again until Monday morning.”

Another custom mentioned by the artist was the custom of carol singing. Like every Hutsul, he was a caroler. For 5 years he has been a leader in a children’s caroling group. I was chosen as a leader of singing, because I knew a lot of songs since I was a child. It did not have any problems with remembering a hundred and twenty-one verses of a song about Oleksa Dovbush. I have not known “Our Father” yet, and I could have sung about Dobush. Apparently, my uncle played behind the tables, and they held me so that others could have better heard me”. 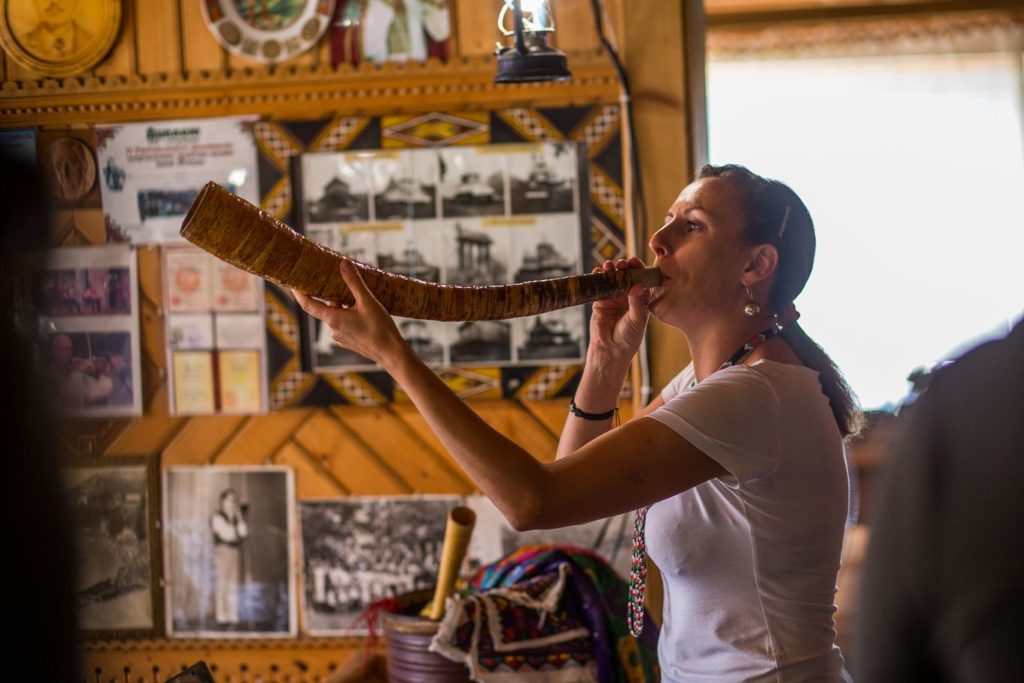 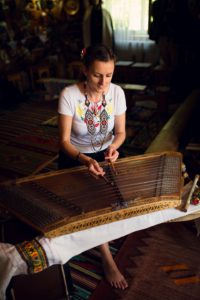 One cannot fail to mention how important was the role of music in magical rituals accompanying the life traditionally spent in the mountain pastures during the six-month grazing season. Specific sounds of signalling instruments, shepherd’s horns, trembitas, fifes marked a special time, the time of transition. They announced appearance of dawn, coming of spring after a long winter, accompanied the birth of a man, and accompanied its funeral ceremonies… According to the old magic rule, the cacophony of sounds repels evil forces. All magic treatments, derived in half from the Christian tradition, partially recalling the echoes of the still pagan forces and divinities that ruled over nature and human fate, were intended to protect the health and life of people. The march of animals and shepherds beginning the grazing season, which took place at the turn of April and May, was particularly vulnerable to “evil” attacks. Not only did he lead into dangerous mountains, full of dangerous rocks, rock cliffs, as well as dangerous animals, but also into a dangerous, untamed space, where old, dangerous forces, evil lurked in the rock nooks and crannies…

The march took place to the accompaniment of sounds emitted by various wind instruments, songs, shouts, voices of people and animals mixing together. Evil had to leave to ensure the upcoming safe season in the mountains. 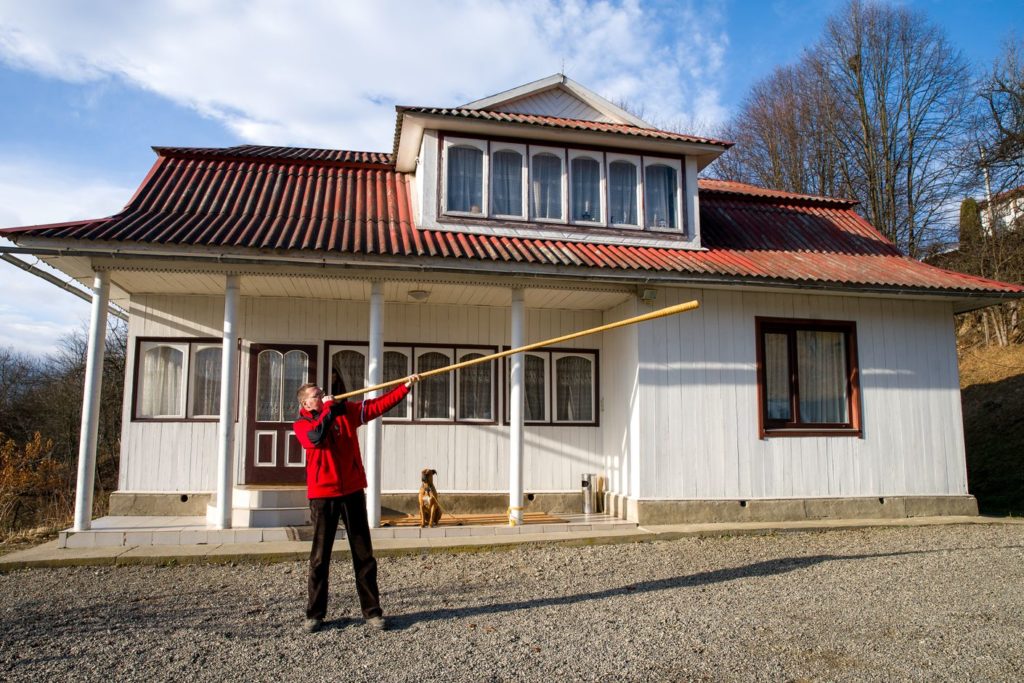 The most associated signal instrument with Hutsul region is the trembita. Its origin is not definitiveky known. It probably came from Asia, where one can also find its variants, for example, accompanying its deep sound rituals in Buddhist monasteries. The sound of the trembitas should be loud, it should resemble the sounds of thunder, the rustling of the forest, the noise of the swift mountain stream. The Hutsul trembita is extremely light, though it is nearly four metres. Traditionally, it should be made of two species of wood. Main stem made of spuce — dry spruce. Then the hollow stem is wrapped with strips of birch bark harvested in the spring. In order for the trembita to be ready for playing, it must be properly moistened. For this purpose, mouthpiece was soaked with water, but it was also soaked with vodka…

Thanks to people like Roman Kumłyk, his daughter Natalia and many other musicians continuing his work, the musical tradition of the Hutsul region will be continue. And although it now mixes, like everything else, a little bit with “Ukrainian disco” and a little bit with Western pop, it still remains vivid.

All quotes are taken from an interview with Roman Kumłyk published in “Pismo Folkowe” no. 110/111:
https://pismofolkowe.pl/artykul/huculska-muzykanie-zaginie-4397

Author of the text: Iga Cichoń
Photos made by:  Andrzej Błoński, Dariusz Dąbrowski 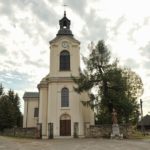 Previous Story:
Jaśliska, a meeting with a turbulent history 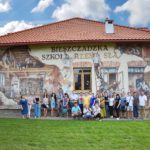 Next Story:
Polish-Ukrainian meeting in Hoczew