Jaśliska, a meeting with a turbulent history 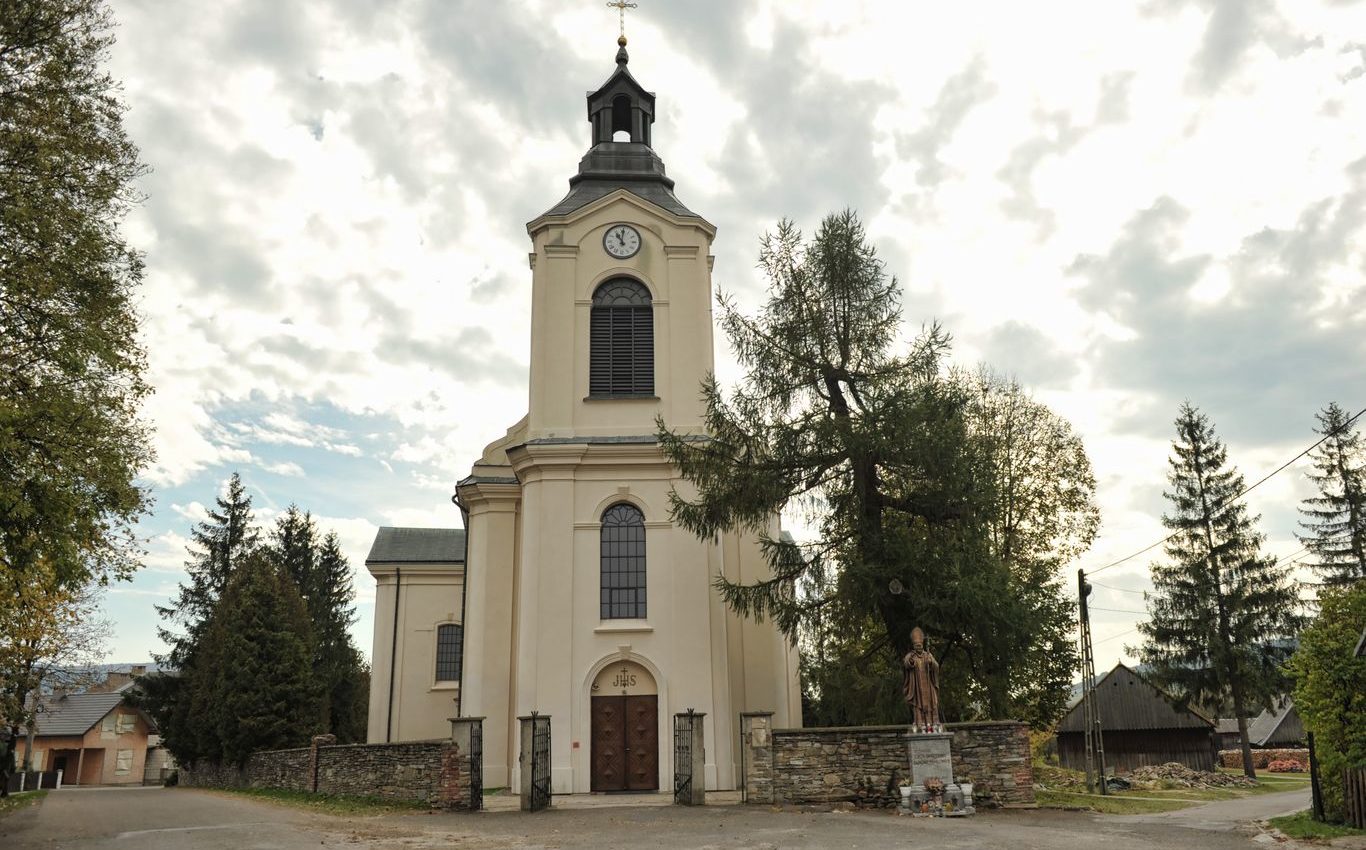 At present, Jaśliska is a village and once, it was a town lying on the Hungarian course – a busy trade route in the past. It has preserved the traces of its past splendour and it seems to have the potential to flourish again, this time in the field of tourism and culture. Located in the valley of the Bełcza River, surrounded by forests, bike trails and ski runs, charming with gorgeous historic houses and chapels, and above all unique cellars remaining after the stores of wines transported here from Hungary. And what’s interesting, the film-makers were enchanted by Jaśliska, who placed their films here. 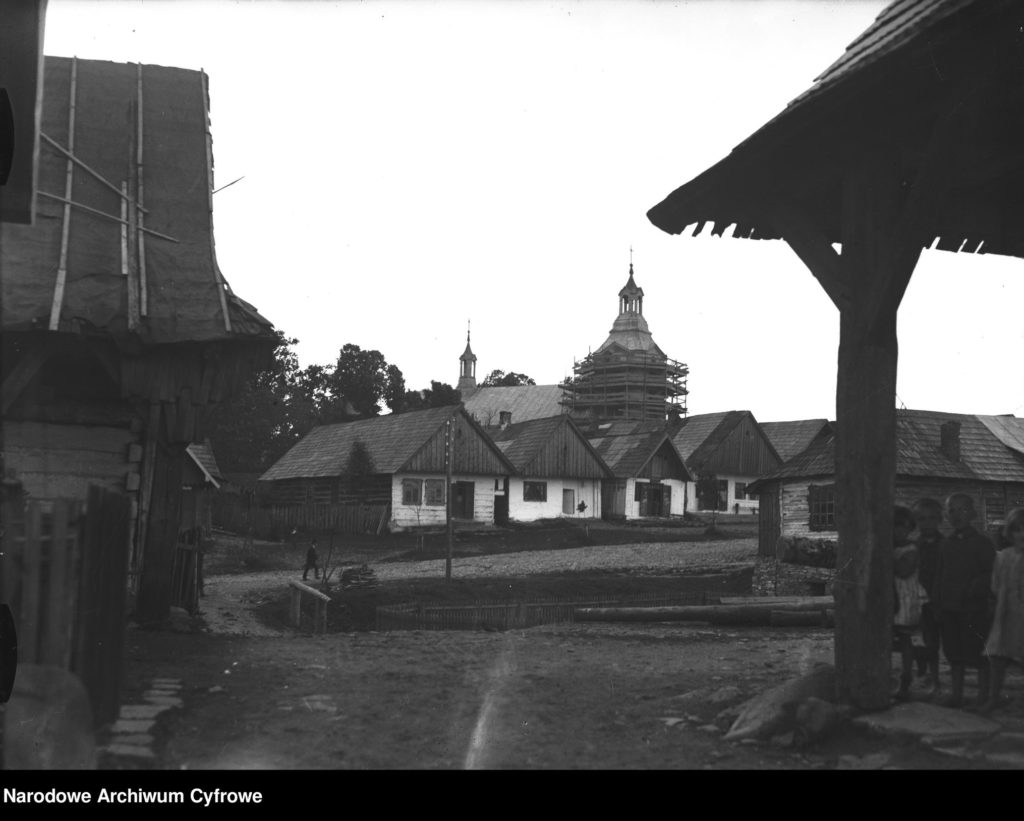 Jaśliska can boast quite a rich and turbulent history. On 28 January 1366, King Casimir the Great gave the town a privilege under Magdeburg law originally under the name Hohenstath (High Town). At the same time, a Roman Catholic parish was established. Situated at the gate of the Beskid Pass, in the delta of the Bełcza and Jasiołka Rivers, on the trade route from Hungary, Jaśliska used to be a fortified fortress with walls 3-4 metres high and at least two metres deep with a defensive moat with a stockade. 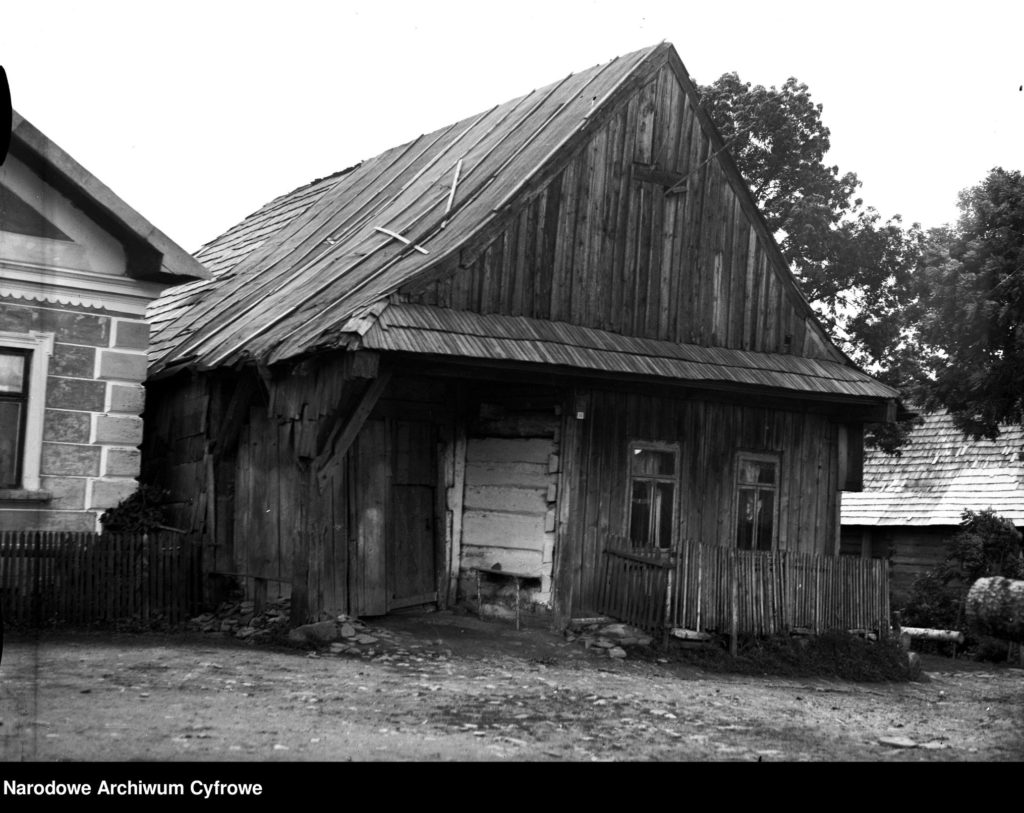 One of the wooden Upper Lusatian house

The town flourished in the sixteenth and seventeenth centuries thanks to the wine trade, being at that time an important customs chamber from which some of the proceeds were to be turned to keep the trade route southwards in good condition. The large market square with its vast cellars stretching under the town hall, the houses surrounding it and even under the church confirms its importance. The decline of Jaśliska began with a new trade route through the Dukla Pass. Trade decreased, crafts were in decline, the town was impoverished and degraded in 1896 to the role of a town to in 1934 and finally, it lost its municipal rights. 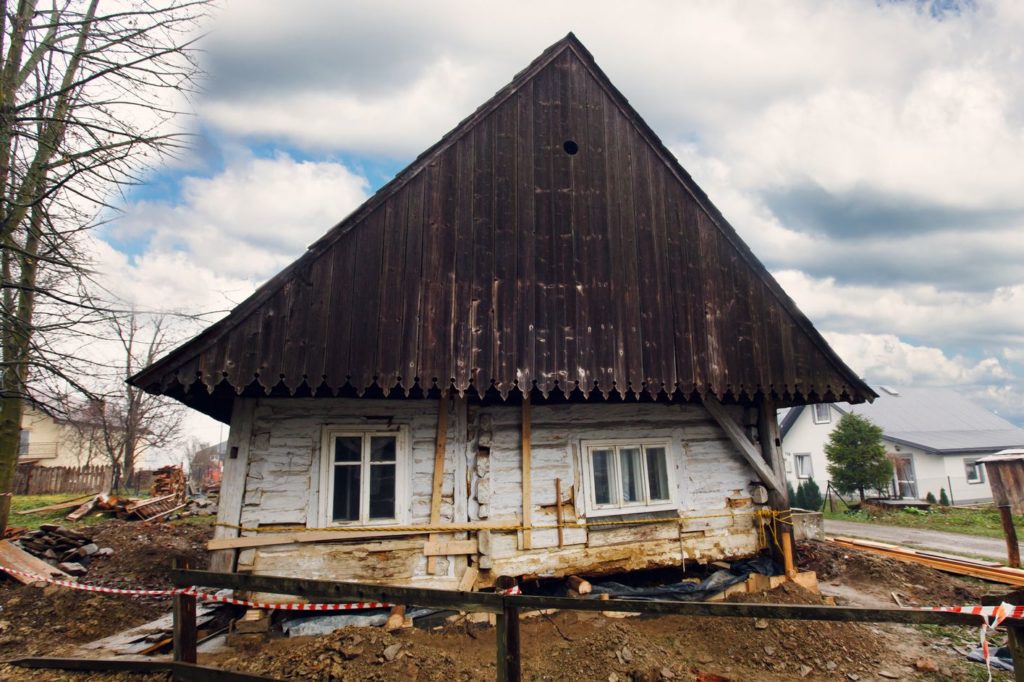 Traces of ancient splendour can still be found in the village of Jaśliska. The “Swedish Kurgan”, also known as the “Swedish grave”, now renovated, is a memorabilia from 1657, when the town repulsed the invasion of George II Rakoczi army. It was less lucky during World War I and World War II. During the latter, the northern part of the village burned down (40% of the buildings). The unique urban layout of the former town has been preserved, with the central market square surrounded by historic Upper Lusatian houses with characteristic arcades. Some of them regain their former splendour thanks to the renovation. Currently, the oldest wooden Upper Lusatian house in Podkarpackie Voivodeship is probably being renovated, dated 1705. It has a vestibule that crosses the house so that wine carts can enter from one side and leave from the other. 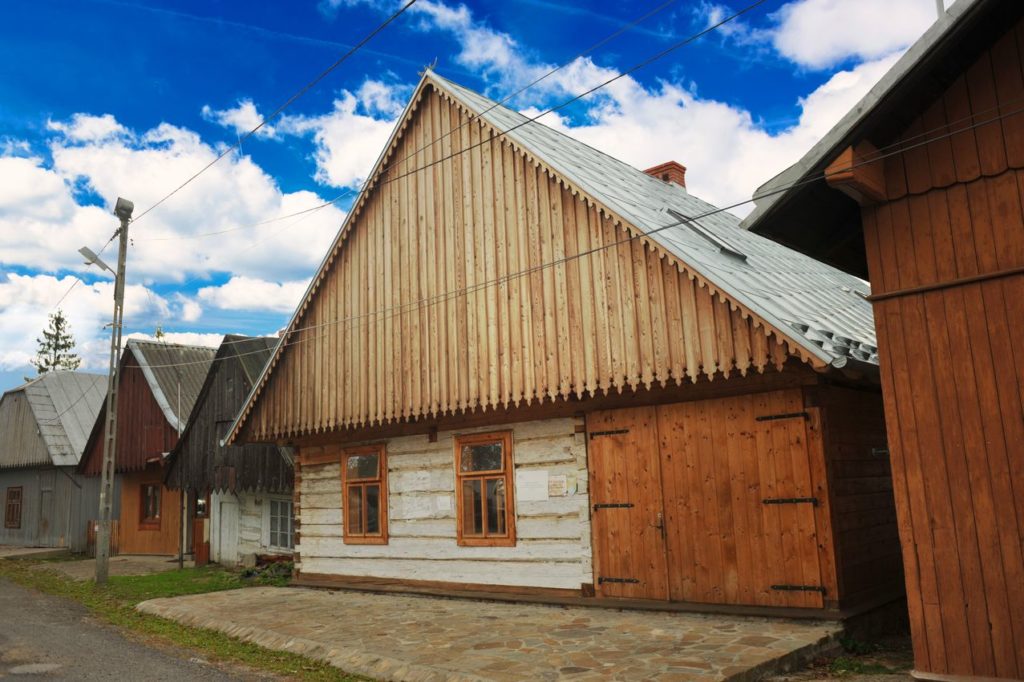 The local regionalists dream of a museum of quern-stones. After all, the coat of arms commemorates two pickaxes and three quern-stones, on which the raw material was mined from the nearby Kamień mountain. In the side streets from the market square there are still many houses remembering the 19th century. In one of them Stanislaw Hausner was born, the first Polish pilot who tried to fly across the Atlantic. This is a typical small-town house with a beautiful statue of the Virgin Mary. Dated to the 14th century, the town hall lost its original shape and appearance as a result of significant reconstruction.

The attention of visitors is attracted by the numerous chapels and roadside chapels in the area. Each of them has its own history, kept also in its usual name, e.g. Na Górce, Na Szwedzkim Kurhanie, Na Łamańcach, Boża Męka . In the Middle Ages, Jaśliska also had the right of a sword (Latin. ius gladii) is the right to judge and execute cases threatened by the death penalty. In the then town hall, the unfortunate were sentenced, killed on site and buried. In the 19th century a chapel was built on this place to “relieve ” the lost souls. There is a memorabilia from 1966 – a monument to commemorate the 1000th anniversary of the Polish State and the 600th anniversary of Jaśliska. Moreover, while walking along winding lanes, it is worth to find relics of broken stone and brick walls from the 16th-17th century that once surrounded the whole town (their original height reached four meters) and outlines of the gates: Węgierska, Dalejowska (Krakowska) and Wolańska (Sanocka), as well as the basements of numerous towers.

Sanctuary of the saint with a wheel at the foot 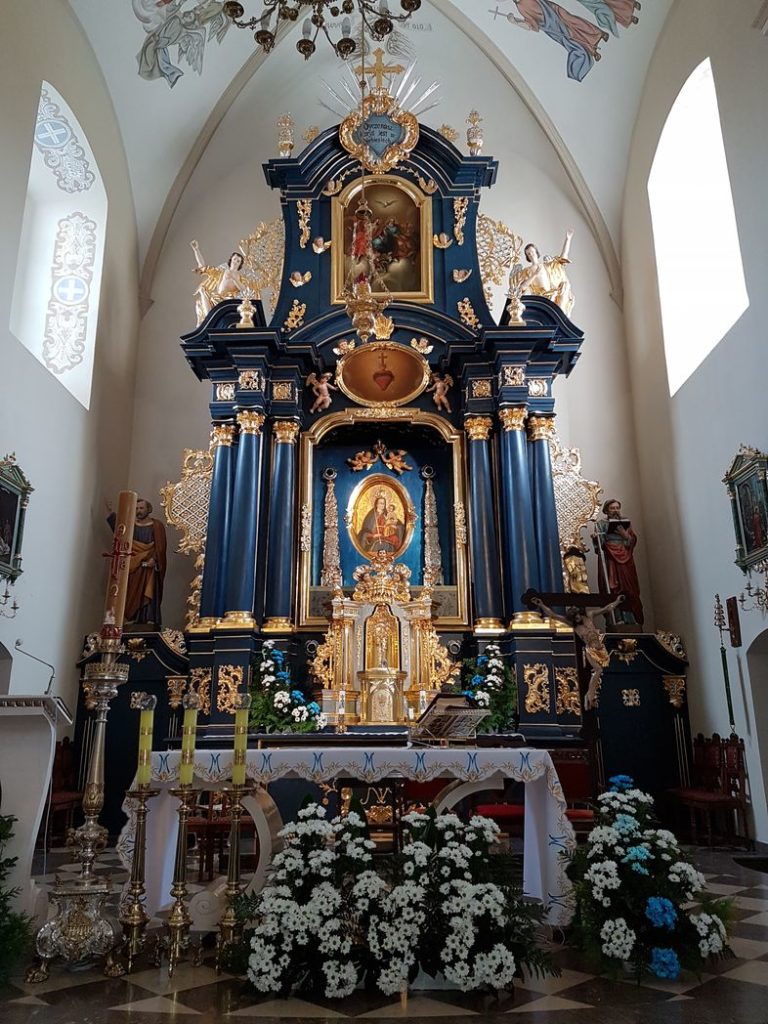 Altar of St. Catherine of Alexandria church in Jaśliska

The most valuable monument of Jaśliska is the church – the sanctuary of St Catherine of Alexandria, erected in 1434 and then developed. Currently, it is in Baroque style with preserved Gothic vault. The highest good of the church is the miraculous image of Our Lady of Jaśliska, Queen of Heaven and Earth, crowned by Pope John Paul II in 1997. The image was created in the 15th century at the border of Czech and Hungary. In 1634, Piotr Burnatowicz, a well-known painter from Brzozów at that time, undertook its renovaton. Also on the side altar there is a wonderful painting of St Tekla, which survived from the fire of the clergy house in 1771. The paintings from the chapel of St Benedict, St Clara and St Anne, painted by artists of the Bogdański family, students of Jan Matejko, are also drawing attention.

In the church there are preserved the relics of St Clara and St Catherine, the patron saints of the church, which were solemnly given in November 2018 by the Belgian bishop from the church that was being closed there. 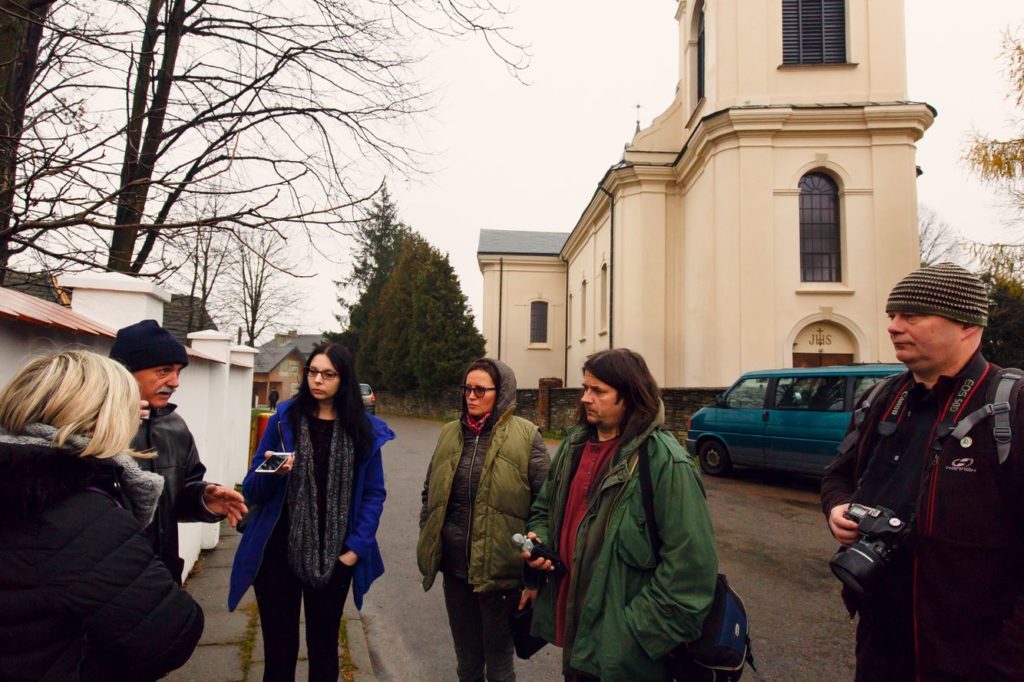 In the labyrinth of centuries-old cellars

Mr. Stanisław, our guide to Jaśliska, invites to a wine tasting: after all, 18 preserved cellars stretching under the Jaśliska market and its houses are an exceptional wealth – a unique trail in which one can not only go sightseeing, but also taste wines. This is a dream of the regionalists! Bold, but real — one can follow the example of Sandomierz — however, considerable financial resources are needed for its implementation. The cellars were created in the 16th century to store the wines transported from Hungary.

Some are up to 30 metres long and 5 metres wide. A whole cargo cart could enter them. Others have a characteristic inclined entrance for comfortable rolling of barrels. They merge into groups of smaller and larger chambers. The all-year-round constant temperature of 7-8° Celsius is ideal for storing the liquor. What is more, one can admire the construction of the cellars. The principle of their construction is stone-stone-wedge-stone-stone-wedge, which are joined with lime mortar. Nowadays, one can visit the cellars under the historic building of the former Bishop’s Manor, converted into a school in the 20s of the last century. These are impressive six chambers of various uses, besides wine, vegetables for humans and animals were stored there. Moreover, current owners do the same. For historians, a receipt of the last Polish king, a receipt for wine from the customs chamber in Jaśliska, is a special treat that was found recently and by accident. 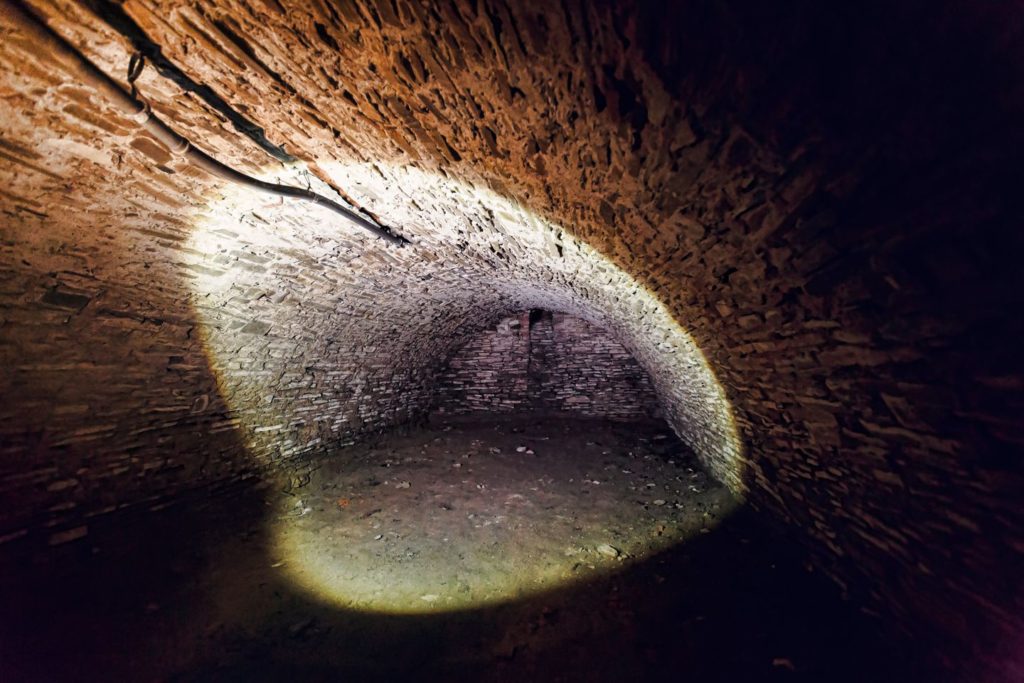 Undiscovered for most tourists stone cellars for Hungarian wine

However, before a weary tourist tastes wine in the Jaśliska cellars, one may quench one’s thirst in the stylish Czeremcha Bar, climbing the stairs which appeared in the daring scene of the film “Strawberry Wine” shot in Jaśliska, in which the actor Maciej Stuhr drove a tractor on them. And if someone has not seen the movie yet, one may expect a special, intimate screening in the Czeremcha. And it is also worth to plan a visit to Jaśliska now for a special screening of the next film by Jan Komasa, entitled. “Corpus Christi”. 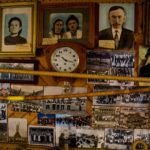 Next Story:
In the world of Roman Kumłyk