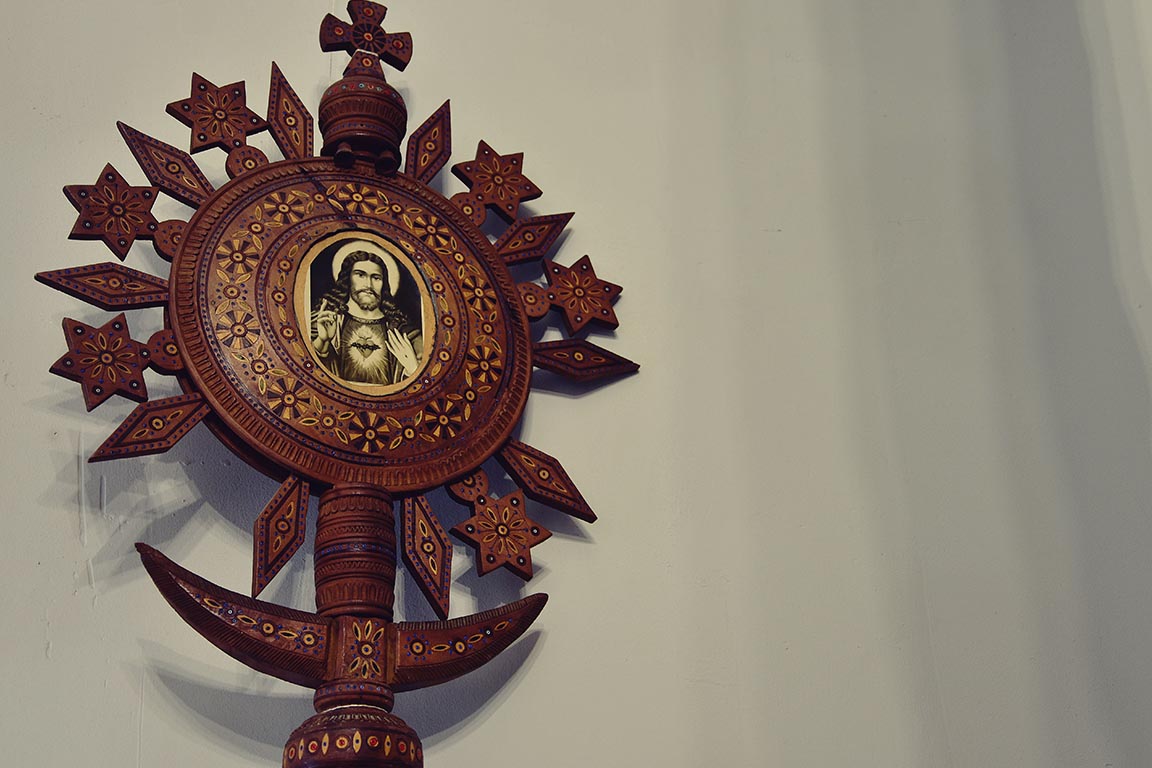 Folk demonology of Boyko region is rich and varied.Beliefs in wraiths, witches,nymphs, werewolves, lords of clouds and other spirits and supernatural beings are an integral part of ideological beliefs of Boyks.There is also a common belief in household deity, among which the most popular is the so-called “genius loci” or “home devil”, imaginations which are typical for all Western Slavs as well as a large part of the West Ukrainian territories.

Most often, the Boykos call the home devil as “hodowaniec” (bred familiar spirit). The following names are also common a familiar spirit, pupil, a helper, a shepherd, the lucky one, a serf,the one who lives in the attic; the one who sits behind the purlin, etc.Characteristic is the tradition of naming the familiar spirit with terms formed from anthroponyms, such as antypko,mychaśko, piotruś, fed’ko. Due to the identification of it with satan, there are also common names such as  unclean devil, bida, did’ko, wertepnyk, mocejnyk and dozens of others.The other name of the home spirit is known for Boykos like domowyk, although according to autochtons,  “the elderly did not call it that way”. 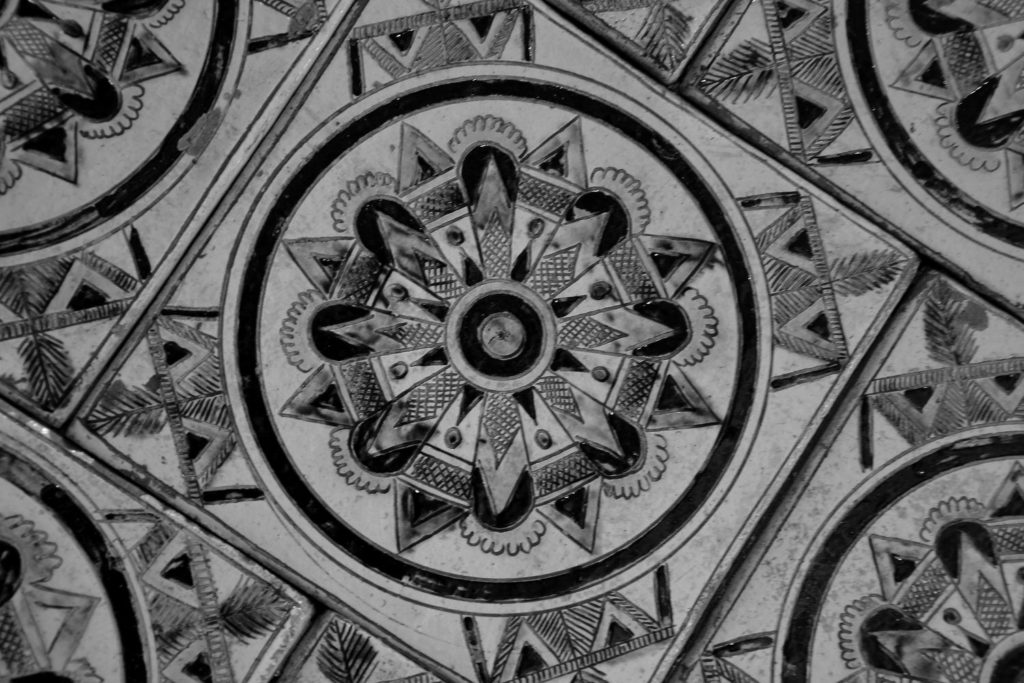 The familiar spirit, as they believe, will come and harm in the hut, built on “unclean ground”, especially in the place where it was once “bred”. If after settlements or construction of the habitat, something strange was found in its interior or neighborhood – the hut was moved.For this reason, they were also afraid to expand the “predwicka” , namely the former yard fence, so as not to “separate the old man”.

According to other beliefs, the home devil was formed every seven or nine years from the soul of the niechrzceniec, a deceased unbaptised child.For it was said, “as the girl aborted an unbaptised child, who was not baptised, the baby was called as a bred familiar spirit.”

The most common way to have a bred familiar spirit was to buy it with some thing or directly with the hut, which was sold with the whole inventory. However, in order not to go broke  when acquiring such a a hut, one had to say “I do not buy as a whole (one was instructed how to deal with such a situation: if people said “Take as a whole”, one should have answered “Keep it as a whole, for yourself”).Just in case they did not buy anything either for “seven” “One should not buy anything as a whole for “seven”, because one could have bought a pig in a poke”.People who unconsciously acquired a bred familiar spirit in this way were only in trouble with it:   “Many people did not know what they were buying, it was said that   they had swelled up and had to go to the priest.And this priest went to sacrifice it.One could have not slept because something was tapping in the chimney.

It was also possible to acquire  loci of their own will.In the Boykos region, there is a well-known story about how the fortuneteller sold the spirit to a man in a bag, provided that he does not look there until he returns home.Obviously, the man did not keep the word and opened the bag too early: a cat jumped out of it and thus the man lost all the money.

However, the most widespread way was to grow a home devil from a small, last or first egg with an unformed yolk, laid by pullet.When the Boykos found such an egg, they immediately destroyed it: they usually threw it with their left hand, with a momentum, or behind them somewhere in the thicket, across the road, over the fence, and usually through a hut or stable.

And whoever wanted to have a bred familiar spirit, they for nine (less often seven or twelve) days “warmed up” the egg under their left arm.During all this time, it was impossible to “cross itself, nor pray nor wash”, “norspeak to anyone”, nor eat or eat only fasting and unsalty food in the chamber and without a candle.Often , the egg was put under the arm, hoping that the last day would fall on Easter.When they sing for the first time “Christ is risen!” , it should be said, “And mine is also risen!” .Then, from the egg.  black chicken will appearor “a devil will jump out of the egg and ask, “what do you waant? “I will help you with it”.At the same time, the Boyks are convinced that one should know th bred familiar spirit, otherwise he takes control of whoever bred it and will lead him to the grave.It is also considered extremely dangerous accidental destruction of the egg during “warming it up”.

Many people think that “no one ever sees except who will have it”.Others believe that he can turn a man into a stick, and into a cat, and if necessary, it will make him completely invisible.” If it turns a man into an animal, it will most often be a black or red cat, a big dog, a black horse, a pig or a snake.It can also turn “into a giant peasant, military” or a small creature in a hat and in red “pants”, a peasant in a “big hat”, “child, a brat”, a little old man who, from time to time, smokes a pipe and has the shape of a grandfather who limps.They often describe as a little hairy boy “like a monkey or a shaggy old man”.

Usually a familiar spirit manifests itself through its activities in the evening or at night, around midnight, although sometimes also at noon.it lives as a home spirit usually somewhere in the stable or in the hut, in the vestibule, in the chamber, in the corner, under the table, on the stove, behind the chimney and in the chimney, on the Russian stove when it is not fired frequently, in the attic in the attic or somewhere in the corner.A familiar spirit can be found under the floors, the foundations of the hut.No one risked dismantling and selling the hut if it was suspected that there was a familiar spirit present.It was best in the case of such a building “to not move anything, not even take a wood chip”.It liked to settle in a tree that grows in the yard or in boundary strip, especially in lilac bushes, in old hollow trees.

About the owner of the home devil they said: “Cross on the chest, and the old man on the shoulders.”The owner of a familiar spirit could have become the richest in the village, because the helper guarded its lord’s welfare, warned about dangers, protected the house from fire, helped in everything: it hinted where to plow and when to sow, walked by  horses, grazed a cow, washed underwear, ground using mills, chopped straw helped in trade and even tossed money, could give the host an incluse, so called “returning coin”.If necessary, it was possible to have several familiar spirits for different types of work.For example, one spirit was acquired “for the hut” and the other “for the stables”.Although, as emphasised, appointing a familiar spirit “to the hut” was dangerous for the host, “because there could not be two hosts in a hut”.There are often stories about contacts between a familiar spirit with craftsmen, in particular construction masters, beekeepers, millers, musicians and even wraiths and witches to help take milk  from other people’s cows and otherwise harm people. 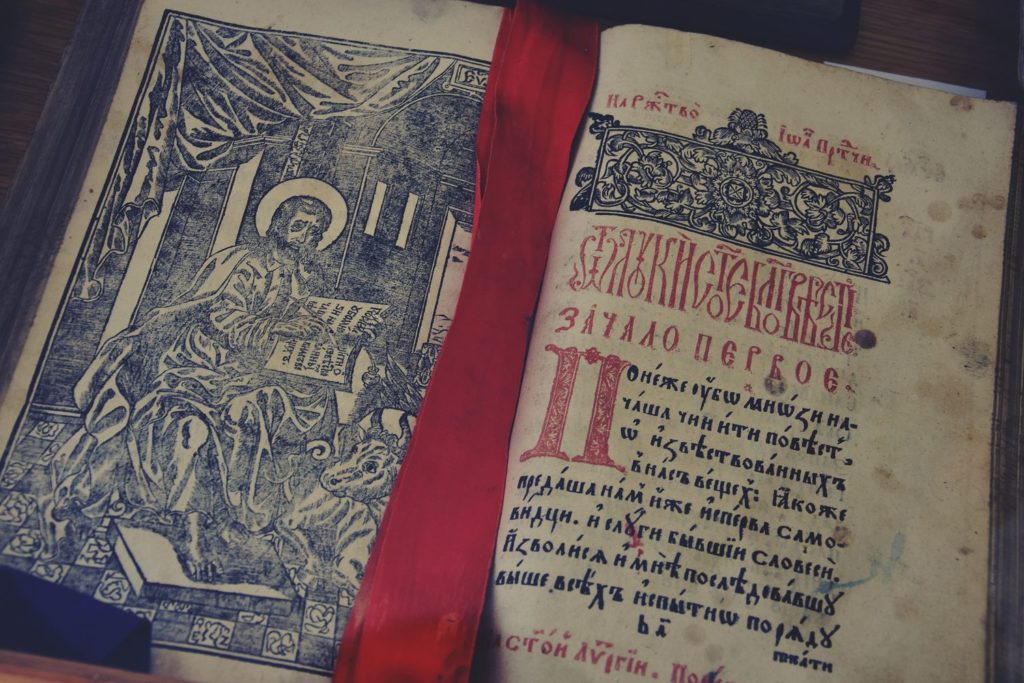 The owner of the guardian spirit was also wary of its bad sides.He/She had to please the home devil because it could destroy the farm, make people sick and die.Besides, where there is a familiar spirit, children are not fed because they are born crippled.It makes the host commit sins, doing forbidden works on the great holidays. If it does not like somebody, it can disturb this person’s sleep and cause him/her to fall out of bed.The owners of the familiar spirit often die suddenly or cannot wait to die for a long time, they suffer a lot while dying until they pass the devil to another host.The farm where a familiar spirit was kept finally disappears.

It is common belief that you need to feed non-salty foods, such as boiled eggs or food that people consumed themselves during the day.Some people think that a familiar spirit is fed once a year, on Christmas Eve, 12 non-salty dishes.Usually, non-salty groats was left for it in some shell.However, if someone gave something salty or holy, it took revenge on the cattle or the whole farm, for example, let the animals out of the farm or knocked them over, or poured grain into the vestibule, made a mess in the hut.There is a widely told tale about how the host left the cottage and before leaving, instructed his farm labourer to carry non-salty groats to the attic.He, contrary to his orders, salted the dish and the home devil got angry, harming the farm until the host came back and fixed the error.A familiar spirit is given things to drink in an unusual way; according to some testimonies, “they fed it blood or it drank blood from a barrel,” according to others, “they gave it milk in the attic”.

It was difficult to get rid of a familiar spirit, especially if it was “bred” in this particular place.However, there were methods for that. It could not get into the hut, which was sprinkled with holy wheat, self-seeding poppy seeds or blessed.In order to get rid of the home devil, it was ordered an impossible task, e.g. wash black hair white.A priest could also drive a familiar spirit out of the hut.Finally, the home devil could be sold in the same way in which it was acquired, that is, “with everything”.

Nowadays, the Boykos usually associate owning familiar spirits with the old times: “But these are ancient rituals.Nowthese old folks are gone because the war destroyed them.Regardless, even now the Boykos are still afraid to buy a hut or something with a familiar spirit (from the belief that it helps only the one who grew it, and it harms others).They are also afraid not to take a familiar spirit from a dying man.Despite the skeptical attitude to these stories (others lie, and I do not lie), one can sense in almost every narrative about familiar spirits a hidden faith in their existence.However, in the vast majority of cases it is rather about unwillingness to come into contact with a familiar spirit.Testimonies of informants often do not contain condemnation or hostility towards those who allegedly owned it or currently have it.They just state the fact that a familiar spirit can be grown by anyone and that it will help its owner.Some even talk about such cases with regret, because, after all, where a familiar spirit works, in fact, there is nothing wrong.

Author of the text: prof. Wołodymyr Hałajczuk
Photos made by: Małgorzata Pociask 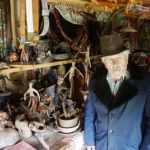 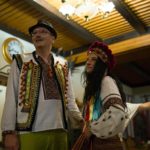